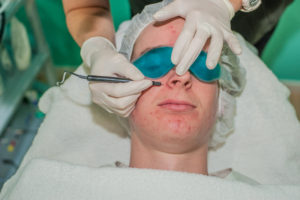 Sebaceous Gland Ablation is a treatment that offers acne affected teenagers and adults a non-medication, permanent solution for their acne. We are one of the very few clinics in Queensland to offer SGA treatments.

SGA can be performed on any active acne lesion, from a lesion as small as a blackhead to lesions as large as cysts. Multiple treatments are generally required to ablate each sebaceous gland (between two and five treatments). Depending on the number of breakout affected sebaceous glands you have, it can take a number of treatments before you become permanently breakout free.

Any surgical or invasive procedure carries risks. Before proceeding, you should seek a second opinion from an appropriately qualified health practitioner.